For our November meeting we had a “movie night.” If you missed out, or would like to re-watch it, the video is embedded below.

This video presentation by Joe Lewis was chosen because it summarizes what I’ve been promoting within the club for the past couple of years: the use of nucleus hives as a resource.

The video gets a little preachy at the end about treating for mites. I want to be clear that I and Portland Urban Beekeepers don’t want to shame people into treating. That is a personal decision. Yes, we shouldn’t ignore Varroa mites. They are a problem, no doubt. And whether you choose to treat or practice treatment-free beekeeping is entirely up to you.

But regardless of how you keep bees or even what kind of hive you use, nucleus colonies can be one of the most important tools we have at our disposal. I encourage all beekeepers to make it a regular part of their practice.

Some video creators behind the YouTube channel Super Deluxe recently visited our honey extraction party and created a very soothing video of the processes involved in harvesting honey. Featuring the hives, bees, and people of Portland Urban Beekeepers. Enjoy!

For our October 2017 meeting, Dewey Caron gave us a great presentation on why we want and how to get FAT winter bees. In addition to the presentation below, there is also a handout.

Summary: A review paper draws on scientific studies to recommend ways to reduce honey bee disease impacts, such as limiting the mixing of bees between colonies and supporting natural bee behaviors that provide disease resistance.

Some commercial beekeeping practices may harm honey bees more than help them, scientists warn in a paper published in the journal Nature Ecology and Evolution.

“Western honey bees — the most important pollinators for U.S. food crops — are facing unprecedented declines, and diseases are a key driver,” says Berry Brosi, an evolutionary biologist at Emory University and a lead author of the review paper. “The way commercial operations are managing honey bees might actually generate more damaging parasites and pathogens by creating selection pressure for higher virulence.”

The paper draws on scientific studies to recommend ways to reduce disease impacts, such as limiting the mixing of bees between colonies and supporting natural bee behaviors that provide disease resistance. The paper also highlights honey bee management practices in need of more research.

During the past 15 years, ecological and evolutionary approaches have changed how scientists tackle problems of infectious diseases among humans, wildlife and livestock. “This change in thinking hasn’t sunk in with the beekeeping field yet,” says Emory evolutionary biologist Jaap de Roode, co-lead author of the paper. “We wanted to outline scientific approaches to help understand some of the current problems facing beekeepers, along with potential control measures.”

Managed honey bees are important to the production of 39 of the 57 leading crops used for human consumption, including fruits, nuts, seeds, and vegetables. In recent years, however, managed honey bee colonies have declined at the rate of more than one million per year, representing annual losses between 30 and 40 percent.

While pesticides and land-use changes are factors involved in these losses, parasites are a primary driver — especially the aptly named Varroa destructor. The parasitic Varroa mite and the numerous viruses it carries are considered the primary causes of honey bee colony losses worldwide.

Varroa mites are native to Asia, where the Eastern honey bee species co-evolved with them before humans began managing bee colonies on commercial scales. As a result of this co-evolution, the Eastern honey bee developed behaviors — such as intensive mutual grooming — that reduce the mites’ negative impacts.

The Western honey bee species of the United States and Europe, however, has remained relatively defenseless against the mites, which spread to the United States during the late 1970s and 1980s. The mites suck the blood of the bees and reduce their immunity. Even more potentially destructive, however, are the multiple viruses the mites transmit through their saliva. Deformed-wing virus, for instance, can cripple a honey bee’s flying ability and is associated with high bee larval mortality.

Following are some of the potential solutions, in need of further study, outlined in the Nature Ecology & Evolution paper.

Reduce mixing of colonies: A common practice at beekeeping apiaries is to move combs containing brood — eggs and developing worker bees — between colonies. While the practice is meant to equalize colony strength, it can also spread parasites and pathogens.

Colonies are also mixed at regional and national scales. For instance, more than half of all honey bees in the country are involved in almond pollination in California. “For a lot of beekeeping operations, trucking their bees to California for almond pollination is how they make ends meet,” Brosi says. “It’s like the Christmas season for retailers.”

Pollination brokers set up contracts for individual beekeepers on particular almond farms. “If the brokers separated individual beekeeping operations beyond the distance that the average honey bee forages, that could potentially help reduce the mixing of bees and the rate of pathogen transmission between the operations,” Brosi says.

Improve parasite clearance: Most means of dealing with Varroa mites focus on reducing their numbers in a colony rather than wiping them out, as the mites are developing increased resistance to some of the chemicals used to kill them. Such incomplete treatments increase natural selection for stronger, more virulent parasites. Further compounding the problem is that large commercial beekeeping operations may have tens of thousands of colonies, kept in close quarters.

“In a natural setting of an isolated bee colony living in a tree, a parasite that kills off the colony has nowhere to go,” de Roode explains. “But in an apiary with many other colonies nearby, the cost of parasite virulence goes way down.”

Allow sickened colonies to die out: Keeping bees infected with parasites and viruses alive through multiple interventions dilutes natural selection for disease resistance among the bees. In contrast, letting infections take their course in a colony and using the surviving bees for stock could lead to more resistant bees with fewer disease problems.

Support behavioral resistance: Beekeepers tend to select for bees that are more convenient to manage, but may have behavioral deficiencies that make them less fit. Some honey bees mix their saliva and beeswax with tree resin to form what is known as propolis, or bee glue, to seal holes and cracks in their hives. Studies have also shown that propolis helps keep diseases and parasites from entering the hive and inhibits the growth of fungi, bacteria, and mites.

“Propolis is sticky. That annoys beekeepers trying to open hives and separate the components so they try to breed out this behavior,” de Roode says.

“Beekeeping is a tough way to make a living, because it operates on really thin margins,” Brosi says. “Even if there are no simple solutions, it’s important to make beekeepers aware of how their practices may affect bees in the long term. And we want researchers to contribute scientific understanding that translates into profitable and sustainable practices for beekeeping.”

Rebekah Golden gave us a very informative presentation on foundationless beekeeping. Most common to top-bar or Warré hives, you can even go foundationless in Langstroth hives.

Here are some helpful tips for reattaching broken or crazy comb in a Langstroth hive. Photos courtesy Susan Rudnicki.

Mite-A-Thon is a national effort to collect mite infestation data and to visualize varroa infestations in honey bee colonies across North America within a one week window.  All beekeepers will be asked to participate, creating a rich distribution of sampling sites in Canada, the United States, and Mexico.  Their varroa monitoring data will be uploaded to www.mitecheck.com.

Andony Melathopoulos joined us again for our August meeting and gave us a great presentation on Living with Varroa. 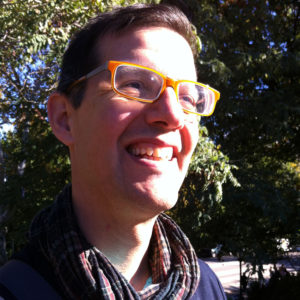 Andony is an Assistant Professor of Pollinator Health Extension in the Department of Horticulture at Oregon State University. His work at OSU comes out of a mandate from the Oregon Legislature to create a state-wide pollinator safety and outreach program. Prior to coming to OSU he was a Postdoctoral Scholar in the Department of Biology at the University of Calgary working with Shelley Hoover and Ralph Cartar on canola pollination. He holds an Interdisciplinary PhD from Dalhousie University (2015) and a Master of Pest Management from Simon Fraser University (1999). Formerly he worked as the chief technician in Agriculture and Agri-Food Canada’s Apiculture Research program (2000-2012).

Rebekah Golden discovered herself as an unexpected bee-lover working as an undergraduate research assistant in a bumblebee pollination behavior lab at the University of Arizona. She found that through bees, she was more in touch with the environment and world around her, and it wasn’t long before she became completely mesmerized by the simplicity of the individual and how that translated into the complexity of the honeybee superorganism. Using charismatic honeybees as a gateway to the ecosystem concept, Rebekah and 2 friends started Bee & Bloom LLC in Portland OR. Together they run an educational apiary with 16 hives & an online resource shining a light on pollinators, sustainability, and natural wellness. 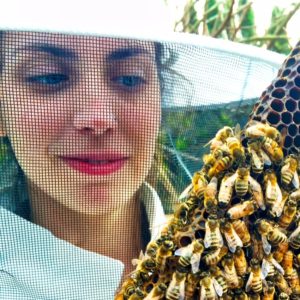