YOUR PUB in Action
Written by Linda Zahl & Dewey Caron

In August 2015, Portland Urban Beekeepers, PUB, received an unexpected invite. The World Affairs Council of Oregon asked us to host a delegation of visiting veterinarians and agrarians from Afghanistan. With enthusiasm, PUB’s Board immediately formed a four person group to welcome the delegation and introduce them to Beekeeping. The group was comprised of Tim Wessels who is PUB’s past president, Bill Catherall who is the current president, Linda Zahl who is PUB’s board member for education and Dewey Caron who is a Professor Emeritus University of Delaware and a PUB honorary member due to his long-time service to the club. After a short email conversation we wholeheartedly agreed to host the Afghan delegation.

We sobered up quickly when we realized that we didn’t know how to plan for this cross-cultural beekeeping visit. What would a delegation from Afghanistan be interested in? Do they know English? How much experience, if any, do they have with bees? Would they have allergies or suffer from “Honey Bee Anxiety” syndrome. In fact, we pondered if they would be interested in our Backyarder experiences at all. The World Affairs Council of Oregon was not able to answer any of the above. Luckily, one issue was easily solved. We all agreed that the allotted two hours would not be enough. Fortunately, the Council gave us a whole afternoon.

With a committee, a time frame, a vague idea of who the audience would be, and enthusiasm, we began to plan. 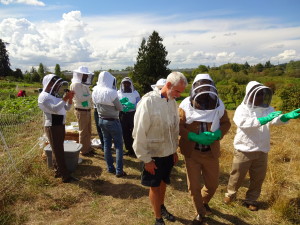 Uniquely, PUB has it’s own dozen-colony apiary at Zenger Farm, an urban organization dedicated to the education of sustainable food systems. The club apiary, maintained by PUB board member Lauren Smith, is an excellent public face for our club. We concluded that we should take our visitors to the Zenger apiary. Then, since PUB’s apiary is a non-chemical apiary, we decided to round out the event with a visit to Ruhl Bee Supply, a division of Brushy Mountain Bee Supply, in order to include beekeeping chemicals and view other beekeeping supplies.

Ruhl graciously allowed us to borrow bee suits and gloves for our visitors. As far as the informational content, we decided to go by the seat of our pants. Open a hive, show how to make a hive inspection, and explain what is going on in the hive. After the opening lesson led by Dewey, with Bill acting as Vanna White showing everyone what Dewey was talking about, we agreed to invite the scientists to gather around any one of us they wanted. That way we could answer questions in small groups while doing hive inspections. 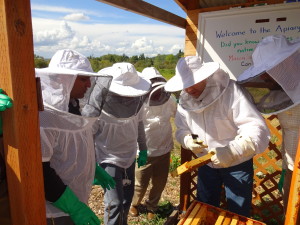 Finally, the day arrived. Nothing is better than warm sunshine on a sweet smelling vegetable farm to show off one’s apiary to perfection. Linda arrived first to make sure the apiary was ready and equipment was handy. Then, Dewey showed up and stood along Foster Avenue to help direct the delegation’s transport into the farm. Next, Portland being the bicycle city, Tim biked up in shorts with his helmet in hand. Bill arrived as did our visitors – we were ready.

Our first surprise was the youthfulness of the nine person delegation. Most were in their 20s and early 30s. Linda surprised all by greeting them in, as she describes, her pre-school Persian. Immediately, the ice was broken as they all smiled and then began to laugh. Persian is a sister language to the national language of Afghanistan, Dari. Once Linda’s Persian vocabulary was depleted, we learned that the majority of them spoke English passably well. In fact, it is always humbling to meet people from other countries who speak English while knowing that we Americans are overall so “language handicapped.” Their translators were hardly needed at all. Four PUB members, nine Afghani professionals, and two translators began beekeeping. 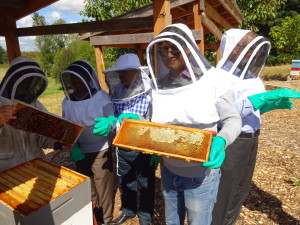 After Dewey and Bill’s opening presentation, the fun began as each of us started opening hives in small groups. When Tim, in his biking shorts and T-shirt, found a Queen, everyone wanted to see her. Those with no beekeeping experience wanted to see the Queen because it was their first time seeing a queen, and those who had experience wanted to see her in order to see what race of bee she was. Throughout the afternoon, Tim amazed them by his calm demeanor while working with the honey bees in only biking clothes. The issue of swarming came up. How do we prevent it? The issue of feeding came up. What equipment do we feed with? The issue of Varroa mites came up. How do we treat them? Chemicals are expensive for the subsistence farmer so what non-chemical treatments are proven effective? The powdered sugar method was of interest since powdered sugar is inexpensive and readily available. Later, when Bill opened the Top Bar Hive, all wanted to talk to him and see the differences. 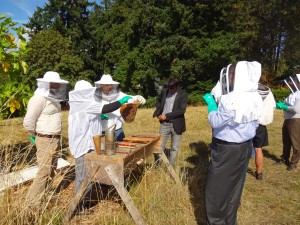 Unexpectedly, the issue of smoker fuel came up. They wanted to know what material is best? Of course, we said all the things we use like pine cones and burlap. Soon we realized that we don’t know what is available in their environment. We were stumped. Finally, the one delegation member who had extensive experience in Apis mellifera beekeeping said that he and his father used dried dung which burns with a lot of smoke and at a low temperature: perfect qualities for a beekeeper’s smoker. Further, the young professionals wanted to feel the weight of a healthy hive, to hold a frame correctly, to see brood and uncapped brood, and to identify honey and pollen stores, etc. Dewey was a great resource as he walked around the apiary answering questions. 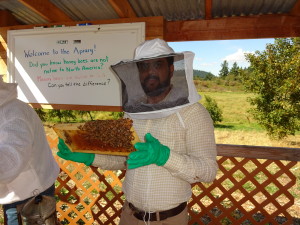 With keen interest, we learned about their Apis cerana beekeeping practices. Apis cerana is a good pollinator, is very Varroa resistant and AFB is not a serious disease (which is big problem there). However, Apis cerana does not supply much honey. As we talked we realized that the information was not just going one way- from us to them. But rather it was a two way exchange. We became equals sharing as friends do.

Two of the veterinarians who supervise women’s backyard beekeeping programs along with other programs in their districts spent a lot of their time with Linda and Dewey. They explained that they have Italian bees. Each project participant gets a few Italian colonies, Langstroth hives, some equipment to go with beekeeping and are given some instruction. We discovered our visitors were not merely professional veterinarians and agronomists but function as a cross between government Ministers of Agriculture and as Agricultural Extension Agents. They have responsibility for both the regulation of farming and livestock (which includes beekeeping) and the dissemination of knowledge and skills throughout their district. Some of the visitors are also in charge of Rural Micro Finance. One of the men explained that he has responsibility for 35,000 people. He spoke of this with pride and with true and unabashed concern for each of “his” people. This tour of American agricultural practices, of which Oregon was only one stop, was considered vitally important to him. “This visit,” he enthusiastically said, “will help me help my people.” 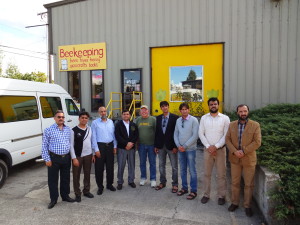 The time came to leave PUB’s apiary and we drove over to Ruhl Bee Supply, a subsidiary of Brushy Mountain Bee Supply. They were very helpful. Not only had they loaned us gloves and bee suits, but they allowed us to use the entire store as a classroom. Dewey and Bill took charge and explained the use of various beekeeping equipment. Also, Dewey covered the use of fungicides, antibiotics, and Varroa miticides. After the program ended, conversation continued.

As we said our good-byes, we felt good. Really good. The good feeling that comes from a warm, sunny afternoon with friends out on an urban farm smelling the ripe vegetables and fruits while doing what we like most—opening honey bee hives and listening to the sweet ladies buzz.